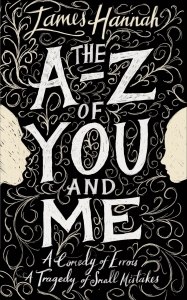 The A-Z of You and Me by James Hannah evokes a whirlwind of emotion as well as twist and turns that the reader cannot help but feel from beginning to end. The narrative is genuinely heart warming, funny and in places an experience of heart-wrenching loss the more and more you unravel it and start to sew the anecdotal threads of Ivo’s life and past memories together. All whilst he is laying in the hospital bed at St Leonard’s hospice. Ivo begins to play ‘stupid mental exercises like the A to Z game’ that Shelia suggests for him to play, in which you have to come up with a body part for every letter of the alphabet and a story to go with it.  James Hannah is able to capture funny, true to life and random moments from the perspective of Ivo as a child and how they have a ‘black trousers, black ink, no worries’ attitude to life. The A-Z of You and Me provides a sense of escapism and encapsulated me within the personal account of Ivo’s relationship with Mia, who he let slip through his fingers due to his carefree, drug filled nights and lively attitude he had in his youth with his friends. As a reader, it is hard to hold back your own emotions as you flick through the pages.

James Hannah’s narrative tells the story of Ivo and how he has come to be forty years old,in a hospice with kidney failure. The narrative provokes a feeling of intimacy, as if Ivo is trying to talk to his love Mia, flashing back to when he was a child with memories of his parents, of when his father passed away right up to his school life and the present day. Ivo’s youth consisted of wild nights with friends Mal, Kelvin, Becca as well as with his sister Laura even attending an s&m party, whilst working at the garden centre by day. Ivo comes across as the type of character that just went along with things and no matter how much he did want to change and how much Mia made him feel like he should better himself, he just didn’t. This all turning to regret as he now has too much time to think about the past. 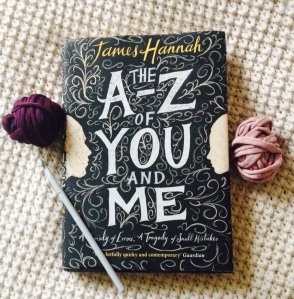 Mia’s character comes across as being really heart warming, charming and quirky. She seems to make Ivo burst into life just like her ‘Yarnbomb’s she spreads all over the town, trying to brighten up other peoples’ days and spread a bit of cheer into their lives. Mia made Ivo see things differently, just like the repeated image of the hands joining together to make a bird ‘up against the sky, fluttering in the blue’. She tries to better him and encourages him to use his ‘green fingers’ to get onto a gardening design course. That’s what is tragic and sucks you into the narrative; the fact that Mia just wanted them to be together and make a good life for both of them even when Ivo couldn’t see it and went off the rails.

Mia’s crochet blanket ‘made with love’ for Ivo, becomes a symbolism for comfort and for Mia herself. He explains even at the very end in which he seems to be dying and going to sleep as the punctuation turns again into short sentences, the crochet blanket still has a ‘strong sense of you’. Ivo always wants to know what Mia would want him to do and whether he should come to some final reconciliation with Mal. Could he force himself to confront the past and talk to Mal after the tragic car crash that has killed Mia? When Ivo sees a crochet heart in the magnolia tree towards the end he doesn’t know whether Mia had put it there, a figment of his imagination or perhaps it was Amber after he asked if she could do a yarnbomb? The vision of the heart calms him, the ‘palm of calm’ a sense of relief for Ivo that he will be reunited with Mia in spirit.

The A-Z of You and Me is a humble tale that seems true to how people feel in life at some point or another. (I once listened to an author say, if you miss your stop on the train whilst reading you know it’s a good book. I had to rush off the tube one morning as I almost nearly missed getting off at the right station). There’s a real sense of life being too short and that even when people try to be stubborn because they feel like they have a right to shut themselves away and punish others, they still secretly know that in the end, you need to be let go.

The A to Z game begins to unpick and encompass the truth of how people feel when they haven’t spoken for a long while due to tragic events and painful memories, as well as the real sense of regret and relief that can be unveiled. The short sentences and the occasional short breathlessness of Ivo throughout the narrative makes you really feel the story whilst also reading it.

Don’t forget to follow The A-Z of You and Me digital tour, sharing more thoughts on the book!